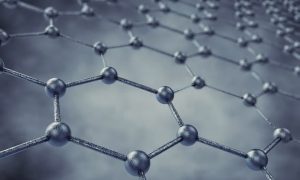 The novel “supermaterial” graphene could hold the key to making one of the oldest building materials greener, new scientific research suggests.

Graphene has been incorporated into traditional concrete production by scientists at the University of Exeter, developing a composite material which is more than twice as strong and four times more water-resistant than existing concretes.

Unlike previous attempts to use nanotechnology in concrete, which have focused on modifying the existing components of cement, the new technique allows a layer of graphene to be suspended in water.

The method produces a high yield of concrete without defects, which can be used in conjunction with modern manufacturing techniques and could be scaled up, the researchers believe, at a relatively low cost.

The composite could be used directly on building sites, enabling the construction of strong and durable buildings using less concrete and reducing greenhouse gas emissions. Using graphene meant the researchers were able to roughly halve the amount of materials used to make concrete.

Its water resistance makes it suitable for construction in areas that are hard to reach for maintenance, while the strength of the composite will make buildings more resilient to future shocks and strains, researchers say. In addition, the technique could be copied in incorporating other nanomaterials into concrete construction in the future, which could pave the way to further innovations in the industry.

Monica Craciun, professor of nanoscience at the University of Exeter’s engineering department, said: “Our cities face a growing pressure from global challenges on pollution, sustainable urbanisation and resilience to catastrophic natural events. This new composite material is an absolute game-changer in terms of reinforcing traditional concrete to meet these needs.”

Graphene is a form of carbon first reliably produced at the University of Manchester by researchers in 2004, work which led to two Nobel prizes. It is made up of a single layer of carbon atoms in a hexagonal lattice. Its structure gives it important physical qualities, including efficient conductance of heat and electricity and unusual strength.

Concrete has been used as a building material since the Romans, some of whose concrete structures still stand today. It is the commonest building material, along with steel, but greenhouse gas emissions from concrete and cement-making remain stubbornly high, in part because of the energy used in their creation but also because the chemical processes required involve the break-up of limestone and release of carbon dioxide.

Cement-making accounts for 6% of global carbon emissions, and manufacturers must make sharp reductions if the Paris climate goals are to be met, according to the Carbon Disclosure Project, in a recent study.

The University of Exeter research, in a paper entitled Ultrahigh Performance nanoengineered Graphene-Concrete Composites for Multifunctional Applications, is published in the journal Advanced Functional Materials, and was funded by the UK’s Engineering and Physical Sciences Research Council.

The samples of the composite tested so far all come up to British and European standards, so getting the composite material into use should be possible. Dimitar Dimov, lead author of the study, said: “Finding greener ways to build is a crucial step forward in reducing carbon emissions around the world. This is a crucial step in the right direction to make a more sustainable construction industry.”